The high school boys’ tennis team begins practice this Monday, July 30.  Any boy entering grades 9 through 12 who is interested in playing should contact Coach Heldman at 812-786-1918.

The boys’ tennis team concluded its season when it traveled to Floyd Central to take on the host Highlanders.  Floyd Central defeated Eastern 5-0 and continues to dominate its own sectional as it is looking to win its 31st consecutive boys’ tennis sectional.  The Musketeers finished their regular season at 5-10 and conference season at 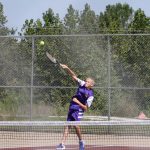 In its last regular season match, the Eastern boys’ tennis team defeated conference foe, Salem, 3-2.  The victory improved the Musketeers’ MSC record to 4-5 for the season.  This was only the second time all season that Eastern was able to field a full team of seven players which was one of the keys to the 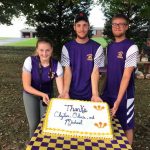 After the last home match of the season, three seniors were honored for their many contributions to the Eastern tennis program.  Thanks Olivia Pickerill, Clayton Purlee, and Michael Smith! 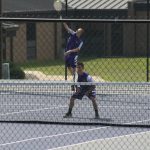 The Eastern boys’ tennis team won all contested spots in straight sets against Borden to defeat the Braves 4-1.  The Musketeers closed out each of their matches with a 6-0 set score. #1 Singles – Mike Smith def. Cory Anderson  6-2, 6-0 #2 Singles – Owen Pickerill def. Mason LaGrange  6-3, 6-0 #3 Singles –

Eastern traveled to Paoli but failed to get on the board as they were defeated 5-0 by the Paoli Rams.  #2 singles player Owen Pickerill was the only player to extend his match to three sets. #1 Singles – Ashton Minton def. Mike Smith  6-0, 6-3 #2 Singles – Dawson Long def. Owen Pickerill  1-6, 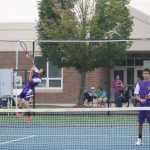 Brownstown Central defeated the Eastern tennis team 5-0.  Both doubles matches came down to a final, third set but the Musketeers were unable to pull either of them out. #1 Singles – Ethan Carlin def. Mike Smith  6-1, 6-3 #2 Singles – Ethan Wischmeier def. Owen Pickerill  6-1, 6-3 #3 Singles – Eastern defaulted #1

The Cougars defeated Eastern in straight sets at each position in their 5-0 victory over the Musketeers.  The Musketeers fought hard but could not win a couple of close first sets. #1 Singles – Cameron Voyles def. Mike Smith  7-6(1), 6-2 #2 Singles – Ben Davis def. Owen Pickerill  6-3, 6-4 #3 Singles – Ricky

Playing in the inaugural Crawford County tournament, the boys’ tennis team competed well but was only able to come away with one victory against the host school and Paoli.  A round robin was conducted at each position. Team Results: 1. Paoli – 21 2. Crawford County – 18 3. Eastern – 11 #1 Singles Dayton

No Events This Week

Events are added by athletic staff.
View All Events